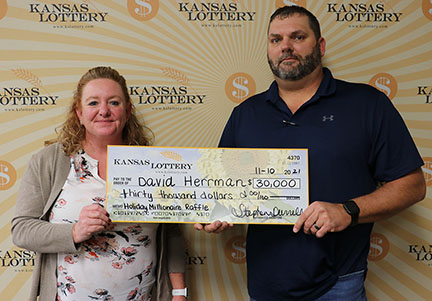 It was a big weekend for David and Brandy Herrman of Wichita! The couple had tickets for the Kansas City Chiefs game on Sunday, so they spent their Saturday running errands. While grocery shopping, David decided to get one more Holiday Millionaire Raffle ticket, since the second Early Bird drawing was the next day. That decision paid off with a $30,000 win!

“I saw the vending machine at the grocery store and remembered the next Early Bird drawing was tomorrow, so I decided to get one more ticket,” said David. “We already had a couple of tickets, but I just decided in the moment to get one more.”

The couple went to the game, and then got home late on Sunday, so they didn’t bother to check any of their tickets. The following morning, Brandy had some free time before work so she decided to check their tickets from the weekend.

“I didn’t even know he had bought another Raffle ticket! We typically keep our Raffle tickets in a safe place, since you have to hold onto them until the final drawing,” Brandy said. “When I found the new ticket, I checked the number on the website and saw where we had matched. I couldn’t believe it!”

Brandy took a screenshot of the website and a picture of the ticket and sent them to David, and then waited on him to get out of his meeting to see that they had won.

“I couldn’t believe it at first, but I double and triple checked and all the numbers matched,” David added. “We’re still a little bit surprised, to be honest.”

The couple says they don’t know what exactly they’re going to do with the money at this time. “There are so many options; we’re still talking it over. But one thing is for sure,” Brandy said with a smile. “It’s going to be a good Christmas this year!”

The winning ticket was sold at Dillons 65 at 3211 South Seneca Street in Wichita. There is still time to get a ticket for the Holiday Millionaire Raffle, but time is running out! As of 8:00 a.m. on November 10, there have been over 111,616 tickets sold, meaning there are less than 38,384 left! The final $30,000 Early Bird drawing will be on December 5, with the Grand Finale winning announcement happening on January 5, 2022, with over 5,000 winning numbers announced including the $1 million winning number!